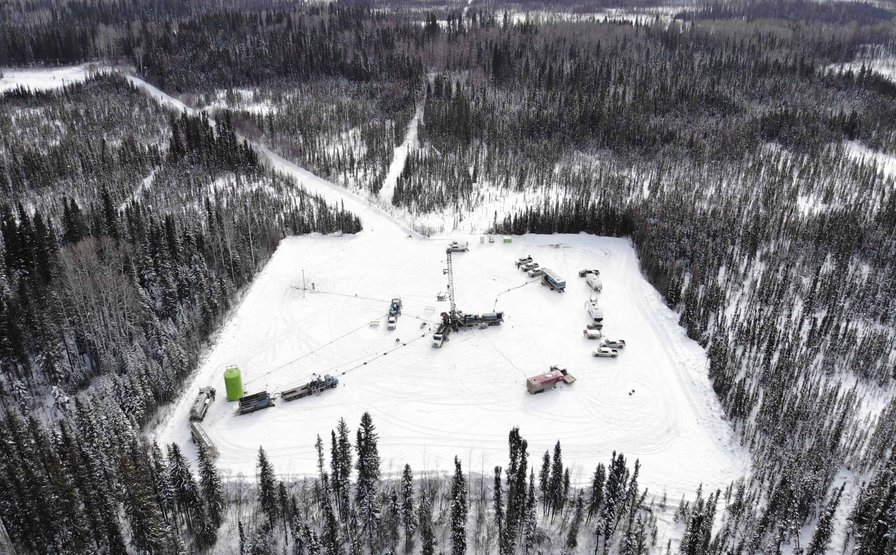 “We are proud and honoured to be able to move ahead to CLGP. Today is the pinnacle of years of hopes and dreams, and all the hard work we have put into this project. And it marks one milestone on our journey to insert our inherent right and build an economic base that will help us be financially independent,” Chief Sharleen Gale of Fort Nelson First Nation (FNFN) said during a press announcement on March 12.

“We’re going to revolutionize the North.”

While Northern B.C. is served by BC Hydro for electricity, the electric grid is fully reliant on fossil fuel-generated electricity. Deh Tai LP aims to reduce the region’s emissions, using the mid-grade geothermal heat resources in its reservoir, and add energy capacity with “clean baseload power,” according to a press release.

Geothermal energy harnesses heat from the Earth’s crust, and transforms it into electricity to power homes and businesses year-round. A drill rig is currently being mobilized to deepen an existing gas well to 2,000-2,500 feet, as well as a new full-sized geothermal production well.

Test results are expected to be available by the end of August 2021, to quantify the heat energy available.

Although electricity generation will be the primary source of revenue, additional revenue opportunities could include the sale of waste heat generated by the plant, according to a press release by NRC.

“Excess heat from the facility could also power other activities in the local industries, such as timber drying in the forestry sector and greenhouse food production in the agriculture sector.”

It is anticipated that the geothermal project will produce anywhere from 7-15 MW of electricity, the equivalent of powering up to 14,000 households.

“This project will act as a catalyst for our nation’s economy and for the entire northern rockies region,” Gale said.

“The past few years have not been easy for us. We have experienced a downturn in forestry and gas and the pandemic has served to compound those struggles. Today is a turning point, as we create good jobs and livelihoods right here at home.”

The project is also expected to reduce 25,000 tonnes of greenhouse gas emissions per year, the equivalent of taking more than 5,000 cars off the road.

“The Clarke Lake Geothermal Project is Indigenous-owned, and Indigenous led, showcasing Indigenous communities leadership in building a low-emissions future,” says Minister of Natural Resources Seamus O’Regan. “Geothermal will help northern and remote communities use less diesel and more of this new clean energy technology. This is how we get to net-zero.”

Minister of Indigenous Relations and Reconciliation for B.C., Murray Rankin said the geothermal energy project is an example of federal and provincial governments working with Indigenous governments towards a common vision.

“This project shows what we can accomplish if we come together. This kind of clean energy project will help reduce our carbon footprint and adapt to climate change — it offers important opportunities for First Nations to participate in a sustainable diversified regional economy,” Rankin said.

The Fort Nelson First Nation has been involved in the oil and gas industry for 50 years, Gale said during the announcement, and this project will build capacity at home, by transitioning workers from other industries into the growing renewable energy sector.

“This is a path forward for us to lead the energy transition and not be left behind by it,” she said.

Will similar projects be considered elsewhere in the country?

“Geothermal ticks off a lot of boxes for us,” said Minister O’Regan. “I’d never venture to say geothermal will take over the world overnight, but in the near term, it provides a safe harbour for people who are currently displaced by the upturns and downturns of the oil and natural gas industries, because their expertise in drilling and exploration are perfectly transferable to geothermal.”

Deh Tai LP is working with the Barkley Project Group — a project management firm with experience in over 60 renewable energy projects, that works with communities on sustainable development, to bring their projects from idea to operation. The Fort Nelson First Nation’s geothermal project has also been supported by the First Nations Major Project Coalition.

Site preparation work is already underway, and the project is anticipated to be complete by 2024.

“We have a lot of work to do. This is something we have never done before, but the possibility of repurposing an old gas well is amazing for us,” Gale said. “Some of the workers have told me when the gas would come out of the pipeline, it was very hot, so in the winter, the snow would melt around it. With that, we explored, did a test well, and the temperatures are hotter than we thought. As we go along, we’re going to be learning, with our members, our Elders, and continue to give updates with our people.”

“Our elders constantly remind us that our future is tied directly to our land and the ability to sustain future generations depends on how we manage the land and our resources today. I believe the GTL puts us on a path we can feel confident in,” Gale said.

Originally posted on IndigiNews written by Emilee Gilpin on March 12, 2021.